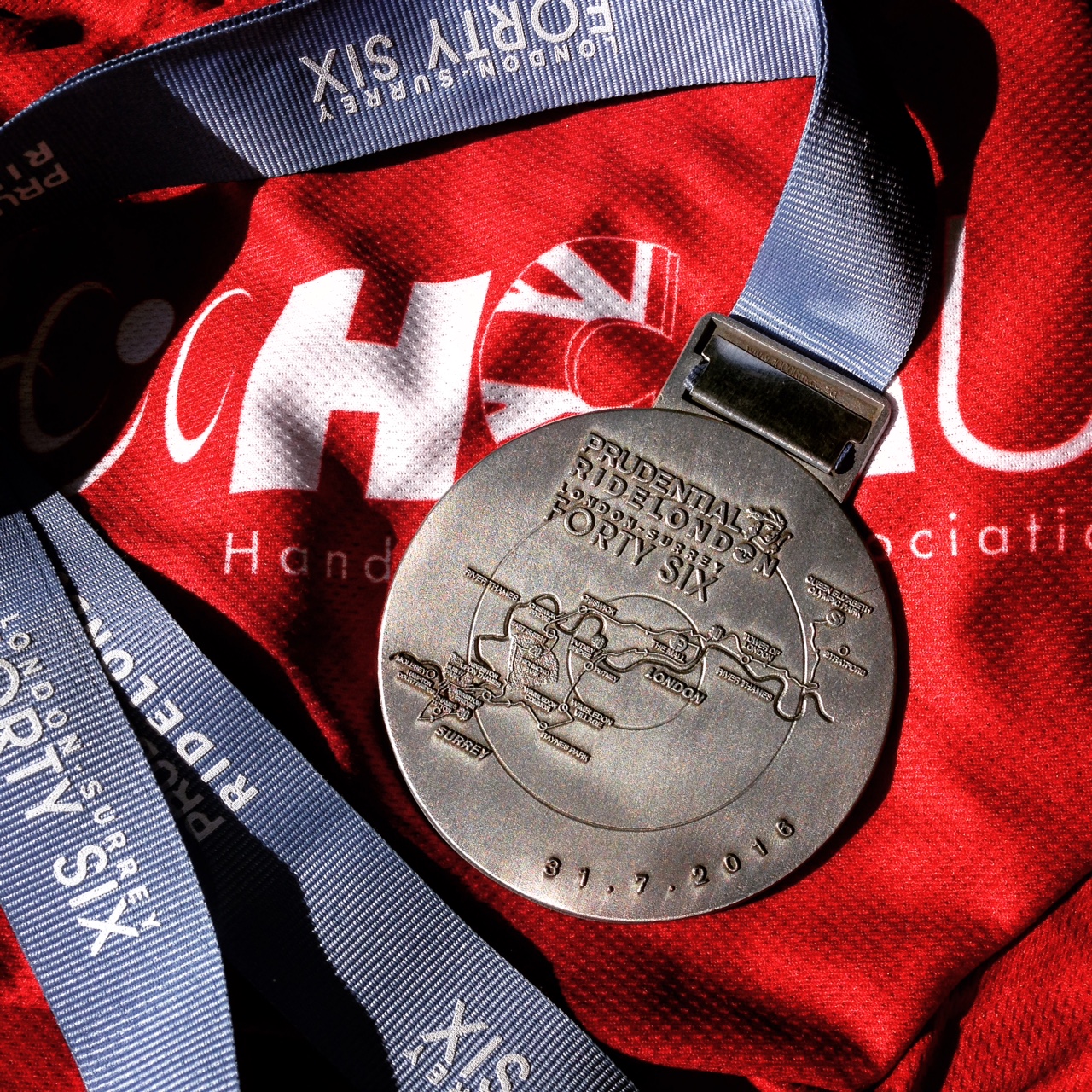 Here’s my review from my perspective of this weekend’s RideLondon 46, hope it gives just a little flavour of the ride and day in general.

Firstly a big thank you to Michelle Weltman and all that helped with the organisation and logistics of getting a bunch of wayward hand cycles and their riders from the start to the finish and then us all back to the starting point at the end. Thank you, it’s really appreciated.

The day starts early, depending on where you’re travelling from and the anticipated road closures with travel disruption, it was a very welcome sight getting to the tennis centre in the Olympic park to assemble, get bikes together and hand over day chairs etc to be sent on to The Mall finish.

I perhaps alone in thinking that our wave ‘load time’ being an hour before the ride start was a bit overkill. However, on seeing the thousands of cycles all being perfect choreographed in their journey around the Olympic park to the start line, on time without any hassle was the first glimpse of how well the day was going to run. Note to the organisers, don’t get me to organise anything like this, as there would still be people trying to get over the start line a day later.

Once over the line and the ride starts at a gentle pace heading north onto the closed roads of the route and a first flour of how great it is to ride on a closed dual carriageway leading into central London. We’re all familiar with driving through the tunnels, yet on a handcycle with hundreds of riders around it’s akin to being in some kind of video game, zipping past the ab riders downhill on perfectly smooth wide roads in the artificial light of the tunnels. Amazing!

A couple of miles in I decided, no wait, my arms and talent decided, that the fast guys would be riding this without me, as they disappear over a undulation towards the Tower of London.

The day being sunny, the first notable landmarks of London come into sight, The Shard, The Gherkin, The London Eye and then the Tower of London, with the starting support from spectators along the route. Before we know it Trafalgar square is gone in a blur and I take note to look around at some of the sights, don’t let this go by without enjoying it. The buzz around the other riders is infectious, chatter about the sight’s the support, the amount of people taking part. Harrods is ahead on the right, I hear a ‘wow’ from a girl to my right. She’s right, in the morning sun, Harrods does look amazing.

After an hour or so we’re out over Chiswick Bridge and into Richmond Park, the temperature feels like it’s at its warmest now as I take it easy (my arms are dictating this), having not ridden in this park before, it’s quite hilly with quite a few humps in the road. Nothing that a handcycle can’t easily deal with, eating a bar and scoffing a gel should perhaps be done on a regular road though. The second drinks station is here and being taken advantage of by many riders.

Shortly after Richmond, we’re in Kingston upon Thames and the first pinch points on the route, no problem, just slow down and have a mental note that this should have been the place to have the snack I’d finished ten minutes prior.

The route separation with the ‘100’ riders going off to Surrey and the ’46’ riders taking the left turn back to Kingston is here… quite how anyone could miss this turning and take the 100 route, I fail to see 😉 … back on course towards Kingston centre and the start line of the old Handcycle Classic, more on that later, it’s tight and again perfectly marshalled, enabling the throng to get through without any issues.

I’d seen a few riders fall along the route, the major collision I saw heading past the Holiday Inn into Kingston was a reminder as to how it’s worth taking time to be very aware of other riders and their different speeds around you. The sight of carbon shards, bike components and the energy of a cyclist hitting the deck at getting on for 30mph was etched on a young spectators face as she gasped with her hands to her face.

The route undulates now towards Wimbledon, where the left turn indicates the last incline heading up to Wimbledon common, yep, my shoulders thanked me for slowing down earlier as it’s quite easy to get up there and shorter than I recall from past years. I’m looking forward to the run down to Putney Hight Street and Putney Bridge, which is the last crossing of the Thames. This section is downhill and very fast, look to for bikes as they’re generally slower than a handcycle along this section. Most riders have figured out now that the faster ‘100’ riders are on the right hand side of the road, while the slower riders are on the left. It works well.

Before we know it, The Kings road is behind us and The Embankment is out tree lined route towards the finish. Albert Bridge is looking incredible in the sunlight, while the ‘false flat’ of Vauxhall Bridge road is an eye opener. Tate Britain zips by on the left, Downing Street on the left next as we come into the thousands of spectators. Now this is starting to sound and feel like and Ironman race, the support is immense, love it! I wave and pump up the crowd more, they all love a handcycle :).

Sharp left turn and at Trafalgar Square, through the magnificent Admiralty Arch and onto the spectacular Mall, flags, sun, trees, crowds, noise, cyclists and the finish.

Now that is how a Sunday ride should be. 46 miles for me on my gentle ride was 3hrs 2mins elapsed time.

Collect the goody bag, medal and the day chairs are waiting as the bikes are loaded into a van for the short journey back to the start and we’re in a minibus.

An excellent day out, thanks to all the support, the riders, the organisers and London that make this a not to be missed event.

oh, I said I’d refer to the old Handcycle Classic… yeah, that was a nice memory, I’d prefer to do the 46 again thanks. As early in the morning you might still have the landmarks but it’s the people that take this event and move it up a gear.

Thanks for reading folks.

Trackback from your site.

This information box about the author only appears if the author has biographical information. Otherwise there is not author box shown. Follow YOOtheme on Twitter or read the blog.

Get on your bike

for fun and fitness